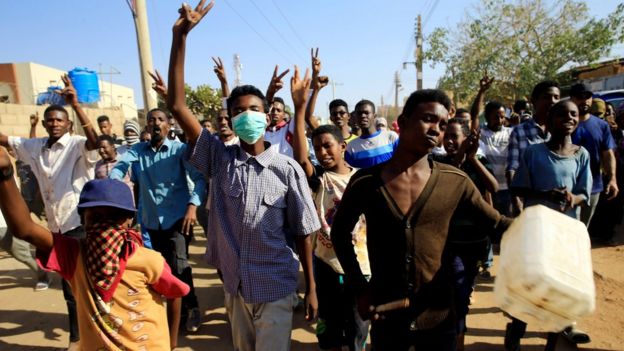 Since Sudan's leader of 30 years was toppled in April, the decision military board that at that point took power has been in strife with nonconformists requesting regular citizen rule.

Scores of dissidents have been slaughtered in a crackdown, starting an across the country common defiance battle. The BBC's Africa editorial manager, Fergal Keane, reports from an administration publicity trip which went astray, uncovering the nation's political splits.

It probably appeared to be a smart thought to someone, in spite of the fact that I can't envision why. The arrangement was to demonstrate to us how appallingly the dissenters had acted. In the event that the world could perceive what they were truly similar to they would comprehend that the routine had no real option except to send in the volunteer army.

Aside from the minute we touched base at the primary medicinal office things began to turn out badly.

Gatherings of Rapid Support Force volunteer army (RSF) were relaxing in the shade on the two sides of the street. They had a little checkpoint outside the Institute for the Blind and were plainly amazed to meet us. "No cameras, no cameras," yelled one minute man.

A few were using the long adheres they have used to player resistance supporters over the most recent couple of days. They are referred to in Khartoum now as "Janjawid Two" - a reference to the way that many served in that heartless power that was utilized to threaten regular citizens in Darfur.

Encompassed by civilian army we moved inside the structure. Any endeavor to point a camera toward them was met with furious alerts. We were guided by wellbeing service minders who demonstrated to us a progression of scoured workplaces. Records were strewn on the floor. There were broken bits of electronic hardware. A minute man tailed us inside. The minders were looking anxious. "You need authorisation to film in here," one of the stick bearers reported. There were telephone calls.

All of a sudden that rarest of things in Khartoum - a grinning civilian army leader - walked through the entryways. He called his supervisor. His manager most likely called another supervisor. Authorization was allowed. We were permitted to film. "In any case, no one out of a uniform," said the administrator.

The wellbeing service minder instructed us to tail him with the goal that we could see the scoured research facility: crushed example cylinders and progressively dissipated records. The representative for the service, Hassan Abudulla, said this had all been crafted by the dissenters. They had broken in and crushed hardware. He appeared to me to talk from a pre-arranged content. So I posed an inquiry.

Q: Do you sincerely trust that the savagery and obliteration was brought about by dissenters and not by men with firearms?

I meandered outside. As it occurred there were a few observers in the zone. For their wellbeing I am hiding their characters. The image they painted was altogether different to the official story. Limited who had been there when the assault happened said that somewhere in the range of 100 and 150 volunteer army had slipped on the structure at around 05:00 on 3 June. This was as the ambush was being propelled on the dissidents before military central station close-by. His record was affirmed by a moment observer.

Our visit proceeded onward to a therapeutic distribution center where columns of prescriptions were stacked, many set apart with "Discharge". This was to demonstrate to us that in spite of resistance asserts the civilian army was not averting the dissemination of severely required drugs.

Next stop was Omdurman, over the Nile and past yet more jeeploads of volunteer army bristling with firearms and rocket moved projectiles. The RSF looks more like a multitude of occupation than an inside security power.

To the extent we could assemble, the reason for the visit to the Omdurman Hospital was to demonstrate to us that this therapeutic office was coming back to ordinary administration in the wake of being shut for as long as two days… typical administration in a nation incapacitated by a common rebellion battle and where emergency clinics have been determinedly kept from the assets they need. This was a noteworthy factor in pushing specialists to move toward becoming pioneers of the dissent development.

In a packed crisis ward we met the group of Ali Omar Hilal, 45, who had simply kicked the bucket while sitting tight for treatment. His mom, Hawa Farj Amer, said he had kicked the bucket in light of a diabetic condition. The family had taken him to a facility closer his home in the town of Khosti outside Khartoum however there was no specialist present. When they achieved Khartoum on Sunday, they found the Omdurman emergency clinic was likewise shut. The dead man lay underneath a sheet on a clinic trolley. His more youthful sibling lay on a different trolley, troubled and being reassured by his sisters and mom.

Outside the clinic a man driving past with a gathering of youngsters swarmed into his pickup truck all of a sudden ceased amidst the street. "The global network needs to mediate," he stated, "There is no harmony here in Sudan. Individuals are enduring a great deal… I am terrified for my nation."

This is a typical view. What is striking is what number of individuals are as yet eager to talk their brains out in the open. The dread caused by the state army has not quieted difference. In any case, the indications of an extending restraint are foreboding. As I compose the web is seriously limited and there are fears of a total shutdown. Online networking was a basic instrument of mass activation for the dissent development. The administration has additionally ousted three restriction pioneers to South Sudan - an unmistakable sign they have little enthusiasm for continuing talks in compliance with common decency to enable a change to non military personnel rule. The signs were apparent when they started capturing restriction figures who partook in a week ago's intervention exertion by the Ethiopian Prime Minister, Abiy Ahmed. The captures occurred soon after the discussions.

Mr Abiy is because of return in the not so distant future. It is difficult to perceive how he will conquer any hindrance between a military routine that is forcing ever more noteworthy control and a restriction development that is presently dissipated and being driven underground. There was a concise flood of expectation when the African Union suspended Sudan a week ago and Mr Abiy set out on his intercession mission.

Be that as it may, the commanders have held their nerve. Specifically, the leader of the RSF, Mohamed Hamdan Dagalo - known as "Hemeti" - is believed to push a firm stance, sure that he has the help of key local players in Egypt, the United Arab Emirates and Saudi Arabia.

"Hemeti" is a most loved of the Saudis, trusted as a result of his help for their war in Yemen - his troops are battling there - and in light of the fact that he speaks to the sort of savage figure who can save the absolutist business as usual they are alright with.

As of late, US National Security Adviser John Bolton has tweeted: "The way ahead couldn't be all the more clear - the TMC (Transitional Military Council) must end the savagery against serene dissenters, facilitate moving capacity to a non military personnel drove government. The world is viewing."

Be that as it may, is it truly viewing? What's more, if so how intently and what will it do to end rule by dread? Since the other situation is somber: a portion of the world cautions and censures yet different occasions mediate. The little conciliatory center that exists in the long run moves away. The media changes its thoughtfulness regarding different emergencies. The world has no lack of disasters and dramatizations. Suppression turns into the standard in Sudan and any desires for a tranquil change blur away. To anyone who has encountered the liberality and receptiveness of the Sudanese individuals that would be a catastrophe.